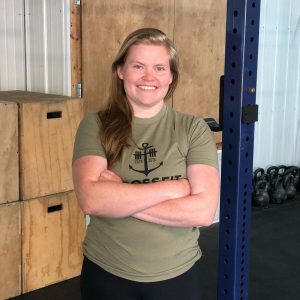 Growing up in White Bear, I found hockey at 10 years old and quickly fell in love with the sport. Since I was so late to the game, I was that kid that couldn’t skate, but I didn’t give up and eventually I decided to try goaltending. Long story short, my passion and persistence took me all the way to Shattuck-St. Mary’s and then to Harvard where I played D1 women’s hockey. Soon after retiring from hockey I realized that I missed the fun and competitive atmosphere of sports. Enter CrossFit. I remember seeing flyers around school with Rich Froning on them for a CrossFit club at a local box. I tried it out and was hooked. Moving home to Minnesota, I kept up with CrossFit and also discovered a new passion for weightlifting. I was completely sucked into the sport and learned everything I could about it. I competed in my first weightlifting meet in 2015 and haven’t looked back. I currently lift with Chopstick Barbell out of Minneapolis and compete for Twin City Barbell. Outside of competing, I love coaching weightlifting and sharing what I have learned to help others achieve their goals. I highly recommend that CrossFitters try out a weightlifting competition, who knows, maybe you’ll love it as much as I do.